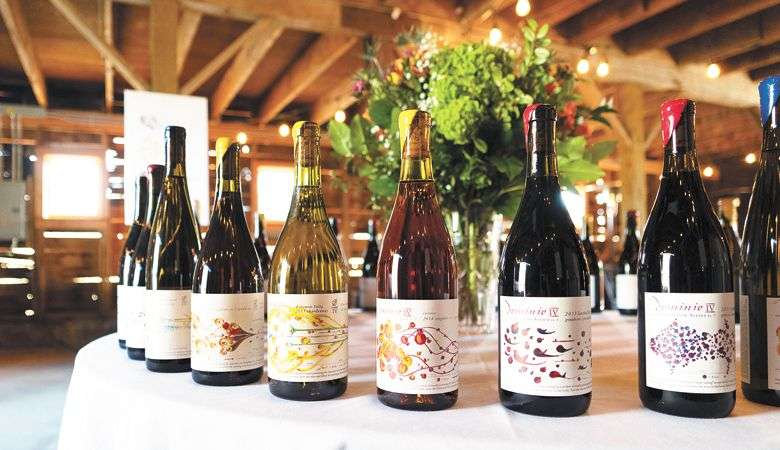 When evaluating a wine’s profile, most of us use words to describe the experience. Think “fruit” flavors, be it berries or lemon, or “floral” notes, such as rose petals, or “vanilla,” an aroma sensation from the barrels used. But what if you were challenged to describe wine as a shape? Winemaker Patrick Reuter of Dominio IV accomplishes just that in the winery’s Imagination Series wines.

Founded in 2002 by Reuter and his wife, viticulturist Leigh Bartholomew, Dominio IV is rooted in both tradition and artistry. The Imagination Series, which consists of 30 different wines, introduced “shape-tasting” as a method of visually presenting the character of a wine by assigning shapes to individual characteristics of the wine — fruit, acid, tannin/texture, umami, etc. — and mapping them across the palate over time. The wines’ labels reveal the resulting images.

Reuter invented the shape-tasting experience in college, while drinking a bottle of 1982 Bordeaux. At just 19 years old, he found himself with no vocabulary and no context to describe what he was tasting. Instead, he sat down and drew a graph interpreting the rise and fall of flavors he was experiencing. Ultimately, this event would become the source for what has evolved into his own unique style of flavor evaluation.

The couple recently hosted an intimate winemaker’s dinner in the loft of their century-plus old barn on their Carlton farm. The evening featured a six-course dinner with as many curated wine pairings. Guests were guided through a tasting experience focused on the artistry of shape-tasting displayed on the labels, Reuter’s visual interpretation of what’s in that bottle. Reuter’s goal was to present the participants a different way to look at and understand wine.

Dominio IV partnered with chefs Christian and Janelle Ephrem of Compass Craft Catering, creating a curated menu showcasing artistry within the food while drawing on the inspiration of each wine pairing. The feast started with a tasting of the individual elements one would find in wine: a mushroom tea representing umami, raspberry jam for fruit, black tea for tannin, and a vinegar mixture for acid. Guests were invited to visualize what came to mind with each bite — as well as combinations of them — and then draw it with pen and paper. Perhaps, visually, the flavor appeared round or curvaceous, sharp or abrupt, undulating, linear… In assigning the flavor a shape, guests ultimately built a lexicon of shape descriptions to later use in describing each of the wines.

After the initial shape-tasting lexicon was complete, guests were treated to an exquisitely prepared dinner and wine pairings; everyone was invited to use their own unique visual language of descriptors to describe the wines in their glass.

Charred Spanish octopus and a roasted red pepper emulsion was accompanied by Dominio IV 2017 Wahle Vineyard Chardonnay. My interpretation of the wine, full of citrusy and with generous acid, appeared diamond-shaped with sharp edges. Whereas my portrayal for the 2018 “Ocean Meets Forest” Pinot Noir, served with a Willamette Valley cheese course, looked rounded, almost berry shaped — my drawings were crude and childlike compared to those of Reuter.

Other pairings included venison tortellini with English pea purée and wild mushroom ragout served with the 2013 “Spellbound” Red Blend, and a crisp duck confit and strawberry agrodolce was paired with the 2018 “Red Pearl” Grenache.

The finale of the dinner — by which point I’d long abandoned my attempt at artistic expression — revealed an assortment of decadent confections not to be outdone by the 2020 Inverse Viognier/Syrah — the Viognier is co-fermented with a little Syrah, opposite of the traditional Côte-Rôtie Rhône-style wine.

There were many rewards — and lessons — from this experience, the first of which was simply attending a winemaker’s dinner. Since the pandemic began, I’ve been starving for a gathering like this, and this one completely satisfied. I also learned to leave the visual arts to those gifted in that area, but, most importantly, I realized how translating your sense of smell and taste into an image can be a liberating exercise.

As humans, we mostly use words to describe our world, but there’s much more than that. The Dominio IV Imagination Series proves the point. Reuter’s shape-tasting provides an opportunity to think outside the bottle and explore wine in an exceptional way. Where it’s difficult to talk abstractly about fruit and flavors, color and shape may better inform the mind, like a more scientific interpretation of taste.

I’m just thankful they didn’t make us dance it.

We Cater the Portland Oregon Area

Christian and Janelle’s true north is their passion for cuisine! Having years of experience in some of Las Vegas’s best fine dining restaurants as well as a global perspective, our approach to food is unique. What sets us apart from other catering companies is our background in the industry. As experienced chefs, we can offer custom curated menus which will deliver exactly what the clients’ wishes are in every aspect.

Our menus are reflections of local abundance and we work closely with local farmers and makers. No two events are the same.  We craft each event to reflect the specific needs of the client. We have the ability to set up a remote kitchen in just about any location. All food is cooked fresh on site. We are experienced in whole animal cookery and can offer live fire events.